Tie Tours has now completed the third and final leg of a three part approach in conjunction with Camden Safer Cities Project. Part one of the project took a series of plays and workshops into the heart of the community aiming to find ways to overcome victimisation. This was a huge success as can be seen in our first evaluation report (CAM 12, dated June 1996). The Safer Cities Project were particularly impressed with our evaluation methods and have used our evaluation sheets as models of good working practice to all their applicants. 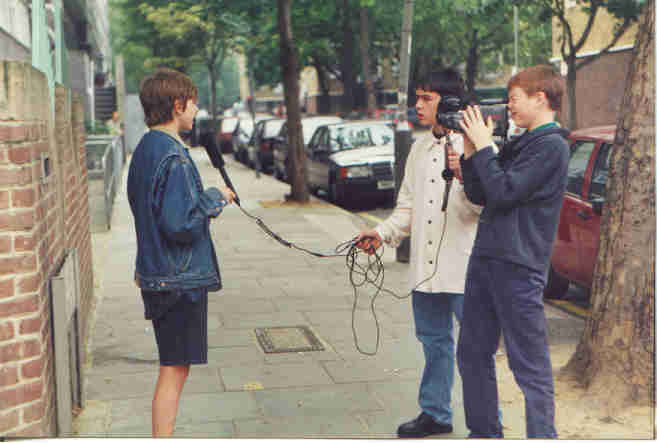 Part two of this scheme built on the first. With an up-dated version of 'Silent Scream' (a play with a theme of bullying), we visited community venues including schools, youth clubs, open air sites and theatres. The audience were then invited to participate in workshops where paths for overcoming victimisation and reasons for bullying were explored. The company also visited venues from part one, to do follow-up work on the visits we made last year. With these groups we took the exploration further, and through the use of a variety of action methods we helped these groups to build short scenes of their own, which we then examined in detail.

Part three, the final part, had three elements to it:

Firstly we worked separately with two groups of young people in Regents Park (Netley primary school) and Somers Town (Working Men's College). We then brought both groups together at Camden People's Theatre. With these groups we explored the theme of violence and crime in Camden. The whole of this work was filmed by the young people and then edited into a documentary style video. This video is being provided free to Camden secondary schools, Camden Libraries, Camden Youth Service, participants on the project and the project funders/helpers.

The second element to this project took us into Sir Richard of Chichester school, where we devised and performed 2 shows on the subject of responsibility to the students. We then ran a series of workshops with the students helping them to create and perform 2 shows for their GCSE drama. This was filmed for the school.

For the third part of this project we commissioned writers to create a new play that will tour to Junior schools in conjunction with workshops. This play is called disadvantage.

All parts of this project, the video, the GCSE drama, and the play have had extremely successful outcomes. Positive feedback is already reaching back to us from people in the community.

A lot of work was put in to promote this project, with positive reviews in local papers, street walking by members to the distribution of leaflets, posters and invitations. Many people who were involved in the organisational process of this project either gave their services for free or at a hugely reduced fee.

The company has liased with many organisations and people in Camden and has worked closely with the Youth Service, the Detached Project, Victim Support, the Police and many local schools. For the video we had an association with the Pan Project, who started a similar project after us. We were able to share some resources and attend one-another's events.

There have not been many problems on this project: We had great difficulty in getting our leaflets printed. After taking artwork to one printer who had agreed to print it at a certain price, then almost doubled their quote to us. We had to find another printer quickly. This was harder than we thought. We eventually found one that agreed to print them. This printer turned out to be very slow and very unreliable. After a lot of legwork and change of artwork (due to printer error) they printed some leaflets. We are not totally happy with what they finally produced. The background is much lighter than had been desired which made some of the elements on the leaflet difficult to read. Another major difficulty was that Tie Tours had to move offices half way through the project. This created considerable inconvenience at a busy time. The other main difficulty we had was with the editing of the video. The editing studio we booked had machines break down, so we were delayed over a week while they were fixed.

In addition to this report we are providing to Safer Cities the following:

We have once again exceeded our outputs, and have had positive feedback from all those that we worked closely with.

We were working with an extremely small budget and have been able to exceed all our targets and have reached a wide range of people. Our normal evaluation procedure has not been used for this report. Many people have benefited from the project already, the video participants and the local people they involved, staff and students from Sir Richard of Chichester school, and the audience for the students' shows (made up of family members and friends). People still to benefit are those that will watch the video and those that will be involved with the junior anti-bullying programme. In the place of the normal evaluation sheets we believe that the video speaks for itself. The video was made by the young people and shows exactly how they thought and felt during the project. It covers all aspects; the highs and the lows, and the extent to which the young people worked together, got things wrong, did things well, shared and learnt. None of the participants had previous knowledge of film work and all worked very well with the professional people concerned.

This project has been very effective, young people have engaged well with what they have been doing. They explored many areas of violence within Camden, how it affects young people and old alike. In the video we get to see how young people feel through the eyes of the young people. The variety of their views are numerous, and we see marked differences between the groups, how they approach the subject and what they feel. We are taken on tours, we get to see interviews, rehearsals and street performances.

This video will be a very useful resource for teachers and people who work with young people. It will be a valuable aid in promoting discussion and dialogue about violence and victimisation. It also shows what young people can achieve, without previous experience, when they are given the space and the tools to create it.